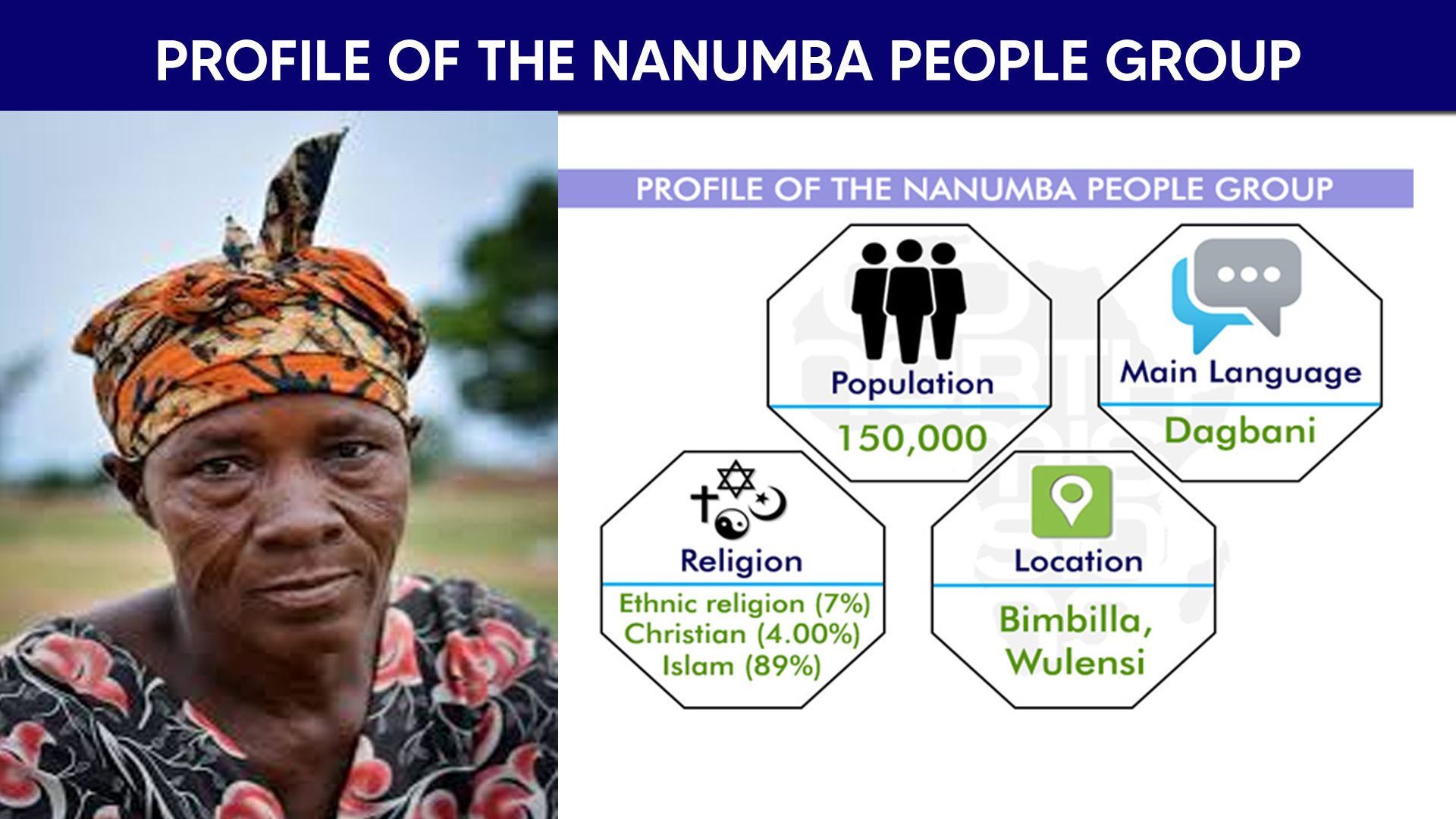 The Nanumba are located in eastern Ghana, primarily in the northern part of the Bimbila district, between the White Volta and Oti Rivers. Their language, also called Nanumba, is identical to a Gur language known as Dagbani. Many Nanumba also speak Hausa as a language of trade.

Although Nanumba claims to be an independent state, it has always been closely associated with its more powerful sister-state, Dagomba. Due to tribal wars, especially with the Konkomba, the population of Nanumba has recently been reduced significantly.

In 1981, the Nanumba voted for the union of British Togo with Ghana and won, sending resentful, angry Konkomba across the border without farmlands. However, the inter-ethnic war cost the Nanumba hundreds of lives.

Today, there is still dissension between the two tribes. More recently, there have been violent coups all over Ghana-the worst reported in the country’s history.

Most of the Nanumba are farmers. They grow yams, peanuts, and corn on the open grasslands. Most farm work is done by the men; however, the women often assist in harvesting. The Nanumba also have side occupations such as weaving and carving. Crafted items are used for trade and as a means of subsidizing their meager agricultural earnings.

Some of the Nanumba men also leave their homes for several months to work on southern cocoa plantations. Hunting and fishing are also important, and the meat is shared among all of the villagers.

The Nanumba have a relatively low standard of living. Kerosene stoves are available, but other commodities such as electricity and pure drinking water remain very poor. Water is drawn from a dammed river. This poor system causes bone diseases due to the Guinea worms that are prevalent in the water.

The Nanumba live in compact, oval-shaped, walled villages. Each household consists of related men, their wives, and their children. Their round, clay huts must be rebuilt every five years due to rain damage. The villages have no central building. The chief owns the land and leases portions of it to each family.

The Nanumba have a large family system, which is divided into hierarchically arranged clan units. The clan elders exercise moral authority over their units. The chief, who can only be the son of a previous chief, controls the judicial system, while the police enforce social control. The society is patrilineal, which means that the line of descent is traced through the males. However, spiritual attributes are recognized matrilineally, or through the females.

The most famous festival among the Nanumba is the Yam Festival. During this celebration they enjoy singing and dancing. The Nanumba still wear their traditional clothing. The children go to school when they reach the age of six; however, their primary duties include house work. Today, there is one state college in the Nanumba region.

Most of the Nanumba practice ethnic religions. For many generations, they have practiced idol worship. Their traditional religion teaches that the “high creator” is unapproachable. They worship the spirits of their deceased ancestors as well as spirits of nature. The clan elders are the custodians of their ancestral shrines. Diviners are consulted about major crises or decisions.

Most of the Nanumba have become Muslim. The Nanumba Muslims celebrate festivals of the Islamic calendar, but they do not circumcise their male children.

Additional missionaries and Christian materials are needed to effectively reach the Nanumba with the Gospel. Medical teams and supplies are also needed to minister to their physical needs.